There are six species of moles in North America, and three of these may occur in your yard (Broad-footed mole, the Coast mole and the Townsends mole). Moles are about the size of chipmunks (6-8 inches in length) and can weigh three to six ounces. Each year a mole can have one litter of two to six young, depending on the health of the female. Gestation lasts about five to six weeks, which means that you can expect litters anywhere from mid-April through May. Believe it or not, young moles have less than a 50% chance of surviving long enough to reproduce.

Moles are insectivores (they eat insects), and they may control some insect outbreaks. However, mole activity can also cause considerable damage to lawns. This damage is usually in the form of tunnels and/or mounds in lawn that can be unsightly, disturb root systems, and provide cover or travel lanes for other small mammals.

If you are like most homeowners, you are probably confused by all of the conflicting “advice” on mole control. You may believe that every rumor, home remedy, or control method is worth trying. A common example is when homeowners try to control lawn grubs and insects to reduce mole activity. However, this is often unsuccessful because the mole’s primary food source is earthworms. In fact, many chemicals and home remedies (including castor oil derivatives and grub controls) are not only ineffective when dealing with moles, but they allow the animals time to establish and become real problems. Moles can quickly colonize and spread through adjacent residential properties if not handled properly. Because they need a well-established tunnel network to survive, control will be more difficult the longer they are allowed to tunnel and become habituated.

On large properties mole activity may move from one part of the lawn to another. This movement is affected by climate and ground moisture. Moles will respond to changes in food supply as different insects become available in different places and at different times throughout the year. If disturbed, moles may temporarily leave an area but will usually return when you least expect it. Even without disturbance mole activity may last only a week or two in a particular area. This here-today, gone-tomorrow behavior is probably the root of most of the misconceptions that make some home remedies and pesticides appear credible.

The only proven long-term method of control, is reducing and/or eliminating the infestation as needed. 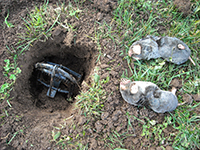