Almost all spiders possess venom for the purpose of subduing their prey – normally insects. This makes spiders one of the most beneficial of invertebrate groups. Spider venom is occasionally used against humans. This usually happens when the spider is trying to defend itself. While many spiders are not able to penetrate human skin with their fangs, those that can occasionally inflict painful and, in rare cases, dangerous bites.

Eliminating spiders from an area for a long period of time is almost impossible with out a professional pest control operator. Spiders do not congregate in a single large nest, so the population cannot be
destroyed by targeting one site. New spiders will quickly recolonise an area if the inhabitants are killed off. In many species, young spiders (or “spiderlings”) disperse by “ballooning”. They spin silk strands
that are taken by the wind, carrying the spiders over potentially long distances.

Although keeping an area free of spiders is difficult, there are many precautions that can be taken to avoid bites. Avoid walking outside with bare feet, especially at night. When gardening, wear shoes, long
trousers and thick gloves to guard against any spiders, scorpions, centipedes or stinging insects.

Wandering spiders can enter houses at ground level, often under a door. Fitting weather strips or using draft excluders can block this entry route. Fitting fly-screens to windows and wall ventilators will prevent any climbing spiders from obtaining access. A cleared area around the house will discourage burrowing spiders from making burrows there.

It is a good idea to educate children to “look but don’t touch” when they find any spiders, and for adults to obey the same rule. It is sensible to be respectful of spiders, rather than frightened of them. 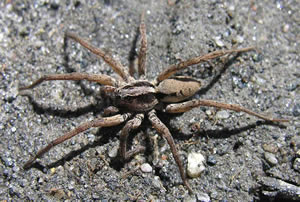 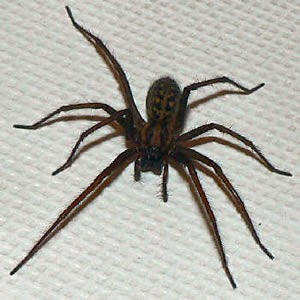