There are two basic types of rats – the black or roof rat and the Norway or brown rat. European settlers probably brought the black rat with them as stowaways, while the Norway arrived around 1775 starting their own revolution by killing off their cousin, the black rat. Today, the Norway rat has taken up residency almost continent-wide, while the black rat has chosen the coastal areas of the southern, southeastern and western United States. In comparison, the Norway rat is slightly larger in appearance. Wherever food and shelter are plentiful, that’s where you’ll find Norway rats. Parks and recreational areas, older industrial areas, rail yards and back alleys are a real breeding ground for both species.

Sewers, abandoned warehouses and garbage refuges are also places that rats frequent due to the abundance of food. The Norway rat typically likes to live in burrows underground or inside walls, whereas the black rat loves to climb and can be found in upper levels of buildings more often than Norway rats. Black rats use nests and make their home in trees or vines. Rats can reproduce young four to six times a year having litters of four to ten. Once they have reached the age of three to six months, they have the ability of reproducing. One female can wean about twenty young a year. Life expectancy for a rat is about nine months.

Black and Norway rats will consume many different types of plant and animal foods such as seed that has been spilled from bird feeders or pet food that has been left outdoors. One ounce of food is all that is needed in one day for a rat to survive with some access to water. Norway rats will eat insects, meat refuse, bird eggs, and, given the opportunity, will devour small mammals and mice.

Food contamination by their urine and feces is one of the major problems humans face with rats. Rats contaminate huge percentages of agricultural produce each year and have been known to contaminate food stuffs such as popcorn.

Rats are enormous carriers of many different diseases, and it has been reported that rats bite more than fifteen thousand people per year involving very young, old or incapacitated. Some of the diseases caused by rats are bubonic plague, salmonella, leptospirosis, hantavirus and tularemia. 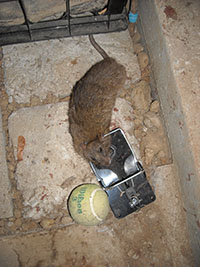