Odorous House Ant (AKA: Sugar Ants, Little Black Ants)
These ants are about 1/8-inch (3 mm) long. Color: Dark brown or black. These ants are most easily identified by the coconut or turpentine odor produced when their bodies are crushed. This odor gives this ant its name. Geographic Range: The odorous house ant is found throughout North America. Habitat: These ants nest outdoors under items on the ground, within landscape mulch, beneath loose bark on trees, under ground cover, in potted plants, and within piles of items, such as lumber, firewood, or bricks. Nests may readily be established inside homes, in walls, beneath carpeting, and other suitable voids or spaces.
Food:
Odorous house ants forage both night and day and eat many types of foods. They eat live and dead insects but are also very attracted to sweet foods. They especially like the honeydew that is produced by aphids and mealybugs. Many colonies of odorous house ants tend or herd aphids and mealybugs to collect the honeydew they excrete.
Biology:
Odorous house ants may develop huge colonies containing thousands of workers and numerous queens. This species may be difficult to control and does not feed much on ant baits. The keys to control are to find the colonies and subcolonies and treat them directly. Regular inspections and service are necessary to find and treat new colonies as they move in from neighboring properties.

1. Modoc : all black. (Legs may have a rusty red color) One queen in parent nest.

Five Sizes : Carpenter ants can be as small as one quarter inch or as large as three quarters of an inch. All sizes can be found in one nest.

Most Carpenter Ant species establish their initial nest in decayed wood, but, once established, the ants extend their tunneling into sound wood and can do considerable damage to a structure. These species commonly nest in standing trees (living or dead), in stumps, or in logs on the forest floor. Since many houses are being built in forested areas, well established, vigorous colonies are readily available in the immediate vicinity to attack these dwellings. This is especially true when the homeowner insists that the home be built with a minimal removal of trees.

Carpenter Ants typically have a parent colony in outside nesting areas, such as live or dead trees, stumps, logs or decorative landscape wood. When the colony grows larger and needs room to expand satellite colonies are established. These satellite colonies often develop in nearby structures presumably because they offer warm protection.

Only the parent colony contains the queen(s), young larvae and workers, while the satellite contains the mature larvae, pupae, workers, and/or winged reproductives. Ants move back and forth from parent nest to satellite nest but just a few ( less than 10 % ) will be visible foraging for food.

Sometimes they can be seen moving mature larvae (white and grub-like) or pupae (papery cocoons).

Ants are generally active along ant trails from April to mid-October. These trails follow natural contours and lines of least resistance and also frequently cut across lawns. Traffic on these trails may be noticeable during the day, but peak traffic occurs after sunset and continues throughout the night.

The parent colony is often located in a tree, stump, stacked wood within 100 meters of the house or wood and stumps buried in the yard when the house was constructed. Decorative wood landscape ties brought in to enhance the beauty of a yard or driveway may also be the source of a parent colony. The colony does not produce reproductives (winged males and queens) until it is from 3 to 6 years old and contains about 2,000 workers. The natural food for these ants consists of insects and other arthropods and sweet exudates from aphids and insects. They are also attracted to other sweet material such as decaying fruits.

Reproductive carpenter ants ( winged males and females ) leave the nest as early as January if the nest is in a heated structure. Those living outside in logs and stumps will not swarm until about early May. The fertilized queens must then find wet wood to establish a new nest, and the cycle starts over again. The new queen could live 15 years or more and lay 70,000 fertilized eggs. 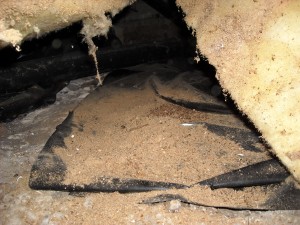