Bed bugs are oval, chestnut-brown insects and are flattened from top to bottom. Adult bed bugs (Fig. 1) measure about ¼ inch in length. The mouthparts are shaped into an elongated proboscis, which, when not in use, is held directed backward underneath the body. When a bug is ready to feed, the proboscis is extended forward and the stylets within are thrust into the skin of a host. Mated female bed bugs deposit their eggs in their resting places. One female will produce about 345 eggs during her lifespan.

All members of the bed bug family feed on the blood of birds or mammals. The bed bug, Cimex lectularius, attacks man, as does the Eastern bat bed bug, Cimex adjunctus. Other species exist that attack bats, pigeons, and rodents. Bed bugs are active only at night, usually just before dawn. During the day, they hide in cracks and crevices in walls, floors, beds, and furniture. When only a few bed bugs are present, they live close to human sleeping areas; when numerous, they can be found in many rooms of the house.

Don’t let this happen to you! 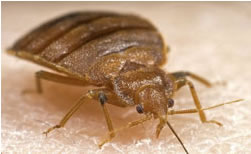 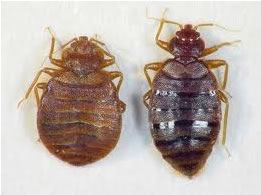 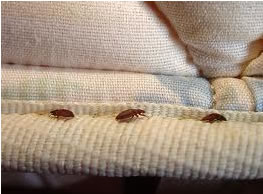