Animals that may come indoors during winter include mice, rats, squirrels, and sometimes even raccoons and opossums. Rodents may come in through almost any opening – pet doors, holes in walls, missing vent screens, openings around pipes, dryer ducts vents, etc. The roof may also be a handy highway into your home. Rats can climb plants or trees that are too close to the house. That’s where roof rats get their name.

In the U.S., rodents try to come inside from October through February. An estimated that 21 million homes in the U.S. are invaded by rodents each year winter.

House mice constantly give off hundreds of micro-droplets of urine as they travel around their territory every day. A large medical research study showed a protein in house mouse urine called mouse urinary protein (MUP), caused allergies in 18% of the inner city children studied.

You know you have rodents when you can hear scampering or gnawing sounds late at night in the attic or behind walls. Rodent droppings may be found in undisturbed areas of the house such as pantries, attics, garages, under baseboards, and along walls.

Telltale signs of rodents’ gnawing may be seen on packaged goods, cardboard boxes, and walls near pipes and vents. Inside, rodents can be very destructive. They chew through wallboards and can eat through cardboard boxes, wood, and plaster.

Rodents carry disease and fleas and leave waste. Wild and domestic rodents have been reported to harbor and spread as many as 200 human pathogens. Rodents, primarily the harmless-looking deer mouse and pack rats, can spread the potentially deadly hantavirus and arena virus. Hantavirus was first identified when soldiers in the Korean War fell ill with hemorrhagic fever with renal syndrome (HFRS). Hantavirus is contracted primarily by inhaling airborne particles from rodent droppings, urine or saliva left by infected rodents or through direct contact with infected rodents.
The Hantavirus Pulmonary Syndrome (HPS), while relatively rare, kills nearly half the people who develop it. After suffering from flu-like symptoms, victims of lethal cases of HPS die quickly from severe lung damage. 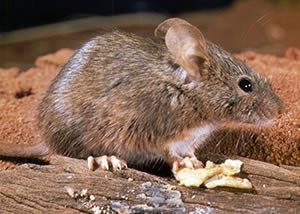